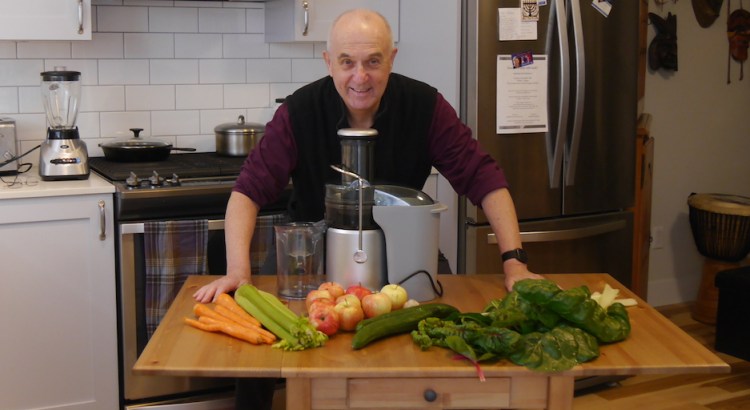 I can’t let the whole month of September go by without any posts. I’ve been juice fasting for 12 days now – nothing but juiced fruits and vegetables – with great energy and 10 pounds lighter.

The photo is from day two, when it was harder to forego food than it is now. I was inspired by a documentary called “Fat, Sick and Nearly Dead.” It was made by Joe Cross, an Australian who was sick and tired of being over 300 pounds, and taking large amounts of drugs for an autoimmune disease that plagued his body with painful and itchy rashes.

Joe discovered juicing and decided to make a documentary about juice fasting his way across the United States for 60 days. In the process he lost 82 pounds and turned countless people on to this way to be more healthy. Eventually, he no longer needed medication. Thousands have followed his lead.

Wanting to try it out, I took a look at his website and saw I could start with what he calls the 3-Day Quick-Start Juicy-Only Reboot. I ordered the same juicer he used, a Breville, refurbished off Amazon for $119.95.

Then I stocked up on organic fruits and vegetables in addition to the produce I get from a weekly Community Supported Agriculture (CSA) box many of us at Vancouver Cohousing receive from Earth Apple organic farm in Abbotsford.