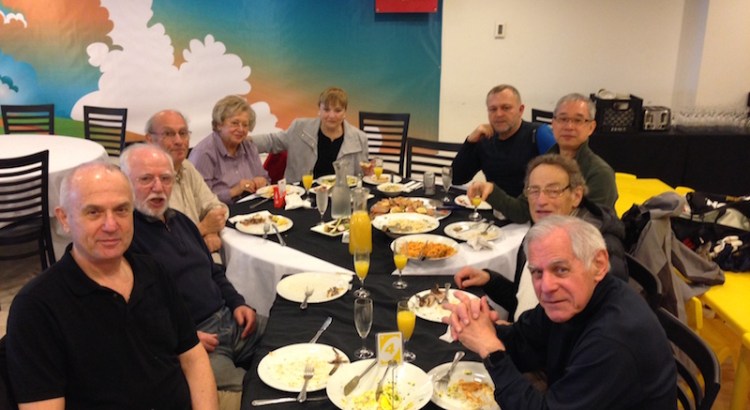 “Seventy,” said Roman, “it’s a major milestone. It’s nothing like turning 69. When I turn 70 [on Feb. 17] I’ll be a completely different person.” I never know when the grizzled Latvian is pulling my leg, or if he actually believes that. Roman is one of the racquetball buddies I play with at the Jewish Community Centre on Tuesday and Thursday mornings.

Several players plus his wife Mina and other friends joined Roman for his birthday lunch today at Shuk at 41st and Oak. Roman – behind me in the photo – is rather banged up these days with two bum knees and a bad shoulder, so he’s taking a break from playing. But when he’s on the court, he goes for every shot, screaming when he’s misses one.

These men are clear evidence that there’s life later in life. The oldest guy I play with is 87-year-old Al. The best player in the bunch, Irv, sitting across from me, is 77 with a silky smooth style and a killer shot. Next to him is Tevie, who has racquetball medals and trophies up the wazoo and is still going at 82. Next to him is David and then Alex. David is one of the younger players at 61. I told him that when I turned 61 I wrote the number down, turned the paper upside down and declared it was the new 19. A month later, it was sobering to need cataract surgery.

Tonight I pulled out one of Gail Sheehy’s excellent books, “Understanding Men’s Passages,” from my bookcase, where she says you’re never too old to benefit from exercise. “After age 70, it is psychological attitude and behavior that mostly determine the quality and duration of the third age, much more so than a man’s genes. Therefore, succesful aging in the later years becomes a career choice.”

In 2014, Sheehy published her 17th book, “Daring: My Passages: A Memoir”. In an interview, she spoke very encouragingly about the memoir process, something I’m feeling as I write these blog posts that are both of the moment and life reflective. “It was very, very cleansing,” she said. “I think anybody in their sixties or seventies if they wrote a memoir would find it a satisfying exercise in doing what we have to do at that age, which is come to terms with our lives and give a blessing to the life that we’ve lived.”