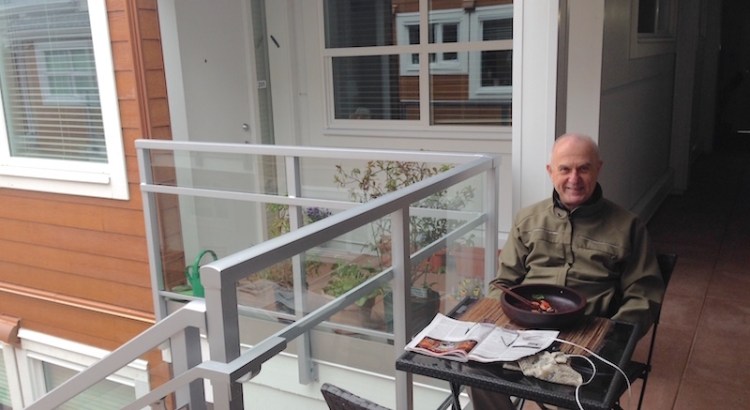 With the better weather, I’ve begun using the first furniture I bought for my cohousing home – a patio bistro set. When we moved in four weeks ago tonight I placed it a few feet from my place along a common walkway that’s mostly covered. I call it “the terrace”. When the clouds clear there’s a lovely view of the mountains; when its cloudy I can still see what’s happening in the courtyard.

I’ve been enjoying my morning protein smoothie or lunch on the terrace. It’s very near the entrance and today a surprise visitor arrived at the gate, a woman named Pat who’s been trying to get cohousing going in Halifax for 10 years. I gave her a tour around the complex and answered her questions.

I see raising consciousness about cohousing as a viable housing alternative as part of our community’s mission. At the same time, we don’t want to be inundated with tours, especially as we settle in and organize how we’ll be sharing our space.

One example of organizing is community meals. After we filled in our preferences for meal days in a Doodle poll, they’re set for Monday, Wednesday and Thursday nights and alternating Saturdays and Sundays for a weekend brunch, all in the “great room” in the common house, spilling out into the courtyard in good weather.

We’ve also filled in our preferences on an online spreadsheet for when we’ll be part of a three-person team to shop, chop, cook and clean up for meal. My first turn will come on Monday, April 11. I’m excited.

I like my own cooking and rarely eat out, so I don’t know how often I’ll be eating these meals (they’re not compulsory), especially after seeing the cost would be $7 per adult. A number of members wrote emails suggesting that was a bit high, so it has been reduced to $5. We’re experimenting as we go along to see what works. I love how we listen to each other.

Note: Students of Japanese etiquette may have noticed my faux pas in the photo. Chopsticks should rest along the sides of a bowl, never inside, which is reserved for the ritual after a cremation when family members pluck out bits of bone that weren’t consumed in the flames.