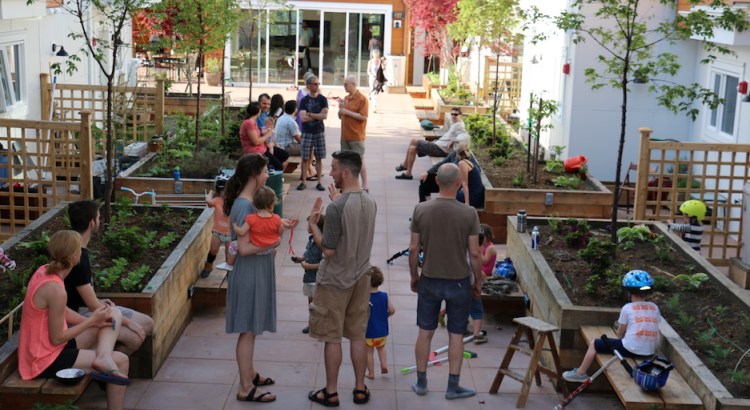 I was asked to write about Vancouver Cohousing both for the KCC Neighbour newspaper and for Hadani Ditmars, who is presenting Vancouverism Then and Now: Designing New Communities, part of the London Festival of Architecture. What follows also serves as my latest blog post. (Photo by Cam Dore)

Vancouver Cohousing is a unique and exciting new addition to Kensington-Cedar Cottage. Cohousing is a style of community living developed in Denmark in which residents own their own homes and also share considerable common space and resources.

The 52 adults and 21 children – and one on the way – living here are feeling more and more settled in as we set up our new homes, plant our gardens and share common meals. We are living the dream of a more collaborative, sustainable and close-knit community lifestyle.

We moved into our 31-unit project – the first in the City of Vancouver – at the end of February, four years after the first public meeting was held at the WISE Hall. That year we bought three double-deep lots on East 33rd Ave. between Argyle and Commercial Streets. In March 2013, we received approval from City Council to rezone from single family to comprehensive development. In July 2014, we broke ground for construction.

We were strangers when we began but we have become good friends over the years of development and good neighbours since we moved in. We have strata title to our homes. Ranging in size from studios to a four-bedroom, all the homes are equipped with kitchens, bathrooms, etc., but as well we share a lot, such as camping gear, childcare, vacuum cleaners and a shared car.

The heart of the community is the 6,500 sq. ft. common house where we serve three common dinners a week plus a weekend brunch. No one has to eat those meals but we’re all on cooking and kitchen cleaning teams. The common house includes a lounge, laundry room, craft room, kids’ playroom, studio where yoga classes are held, shared office, two guest rooms, workshop and teen room. We do the maintenance.

The central artery is the courtyard, where we hang out together. All the kitchens on that level face into the courtyard to promote more social contact. It’s also where the children ride their scooters. Cohousing is a kids’ paradise where they can run out their front door and play with their friends.

We recently hosted more than 40 of our immediate neighbours to a block party. We’ve just received a Neighbourhood Small Grant from the City and intend to host another event in the summer. We are very happy to be here.