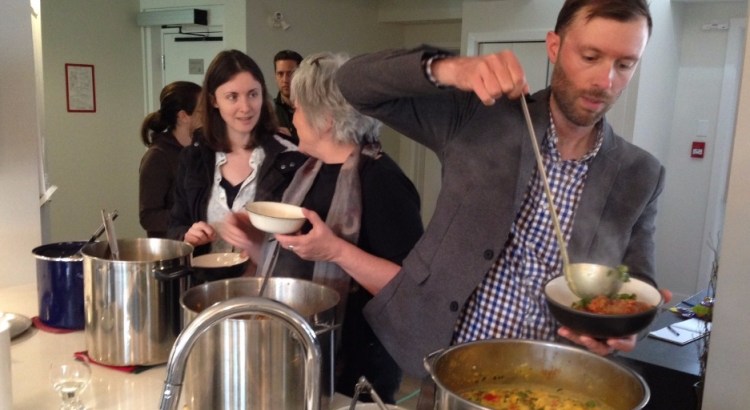 Our team of three served an Indian feast for dinner at Vancouver Cohousing, complete with my fire-alarm eggplant bharta – named not for its spiciness (we dialed that down because of the kids) but because when I was sauteing the onions in smoking oil for it Sunday night I triggered the fire alarm that brought three firefighters to the common house to investigate. Now I’ll always turn on the fan before I turn on the stove.

It was a huge hit with the 40 or so adults and children who turned out for the Monday night common meal. We have them also on Wednesday and Thursday evenings as well as a brunch on the weekend. The cost is $5 per adult; $7 for meat options when we have them.

Getting a headstart on Sunday gave Darcy, Tara and me the chance to offer a more elaborate meal than usual. Even with the fire alarm, it was so much fun working with them to present a feast to the community. 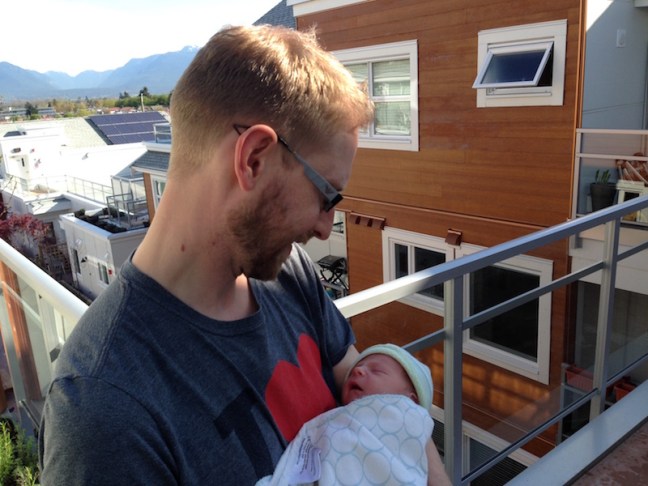 Catching up on some community news: Thursday night I heard even more footsteps in Andrew and Ericka’s unit above me than usual, like there was some serious pacing going on. It was getting to me until I remembered Ericka was full-term pregnant and I should cut them some slack. Little did I know.

Friday morning I spotted Andrew with a little bundle cradled in his arms. The baby boy was born at 9:37 pm in a birthing pool at home with a doula and midwife attending. Today Andrew said they were 90 percent set on a name for Jacob’s baby brother. Somehow I don’t think the name I suggested in jest is in the running – Strata, since he was born on the same evening as our first strata annual general meeting.

Baby boom? Leila in the unit next to me was born in November. There are now 21 children in the community, about half of whom have been born since we started this project four years ago.