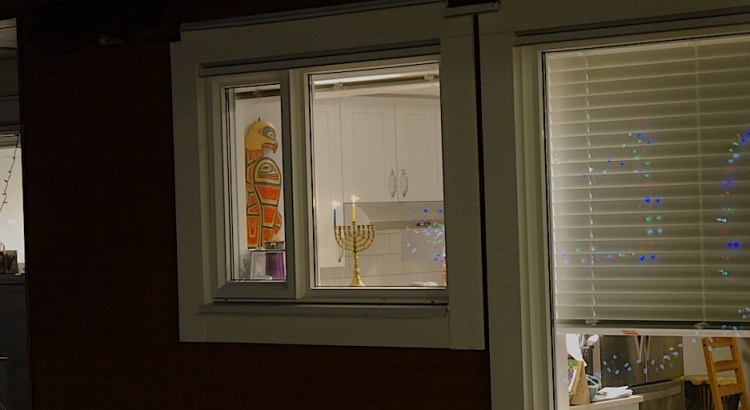 When I lit my first candle after sundown on Saturday, it was the first time since 1978 that Christmas Eve and the beginning of Hanukkah coincided. In fact, only the third time since 1872. Following Jewish custom to share the light, I placed the menorah in my window at Vancouver Cohousing while my neighbour’s Christmas lights reflected off the glass.

The coincidence this year – the Jewish calendar is lunar and events are at different dates on the more common calendar every year – has me reflecting on my relationship with Christmas and Hanukkah. As an introvert, it’s easy for me to feel like an outsider, and that feeling is deeper at this time of year when the dominant culture is saturated with Yuletide shopping, music and celebrations.

I grew up in a secular Jewish family in the Vancouver suburb of Burnaby. As far as we knew, we were maybe the only Jewish household around. We weren’t religious, but we weren’t assimilated either. We never celebrated Christmas, although I did love to go carolling.

We lit Hanukkah candles, ate my mother’s yummy latkes and exchanged gifts on the first night. It was a sore point for me that with my birthday on Dec. 30, I was often told that “this will do for Hanukkah and your birthday.” That was usually for bigger gifts, like the metallic red bike I received one year. Not so much for new pyjamas.

Hanukkah is a minor holiday – not appearing at all in the Bible – but has a much higher profile because it comes around the time of Christmas. And Jewish kids want presents too. By the time I became a father in 1983, it was customary to give kids a gift every night for the eight nights of Hanukkah.

Over the years I’ve continued to light Hanukkah candles and my offspring in the nation’s capital does too. I have no hesitation to place the lit menorah in the window, but that’s not taken for granted everywhere. An American writer, Edmon J. Rodman, writes in the Jewish Telegraphic agency website: “. . . in the uncertain light of political change in our country, I was worried about what was emerging from the shadows: anti-Semitic iconography online, attacks on Jewish journalists, the re-emergence of Jewish conspiracy stories, Jewish college students being confronted with swastikas. Was this a wise time to let our light shine?”

And in Europe, some public events have been cancelled in the light of terror attacks. Seems like an odd turn of phrase – in the light – in this context. Cnaan Liphshiz writes in the Times of Israel about candle lighting in Europe this year.