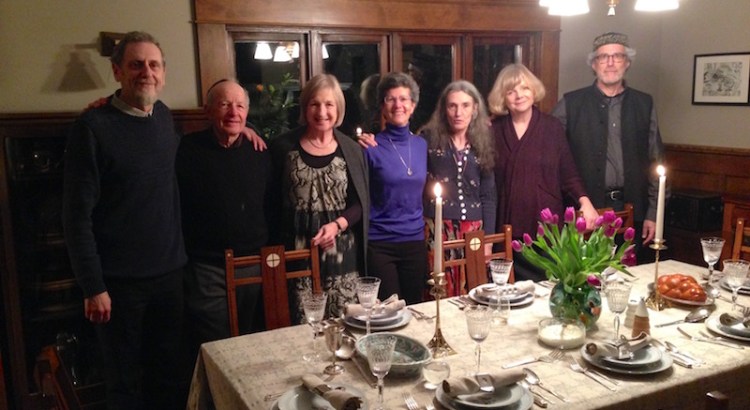 Friday night was a delicious and friendly adventure called Come On Over. It’s a fundraising initiative of my spiritual community, Or Shalom, where 16 households host and prepare sumptuous shared meals under the banner of “Building community one dinner at a time.”

The pitch: “Why go out to a restaurant when you can donate the equivalent amount to Or Shalom and enjoy a delicious meal provided by your hosts in the company of other members of our community?”

Our gracious hosts were Patricia and Martin, on the right in the photo above, who have a gorgeous house in the City Hall area. My fellow guests were, from left, Mark, Maurice, Sue, Linda and Aur – we each paid $75, some of which will count towards a tax credit.

Patricia described the meal in advance: “We’d like to do a sort of Yucatan-style dinner with grilled fish, sweet potatoes, guacamole, a zucchini-lime saute and an almond cake for dessert.” Plus she made mango coconut ice cream.

After blessings for the Shabbat candles, wine and challah, we sat down to the scrumptious feast. Martin had barbecued red snapper to perfection with a tasty sauce. Green and red salsas added zip. Everything was divine.

In the conversation, Maurice reminded me that we’re almost birthday twins. The fellow Club 69 member was born six days earlier on Dec. 24, 1946. Maurice suggested we do something to celebrate our 70th. I’ve been thinking it over and it turns out that Dec. 24 this year is on Shabbat, so we could co-sponsor the kiddush lunch. And then that evening we could have a traditional Jewish Christmas Eve – Chinese food and a movie – and extend it into party with live music. How about a Charlie Chaplin silent comedy with musical accompaniment like the old, old days. Maybe at Vancouver Cohousing in the common house.

Some weeks ago I received an email from Linda, who had been going through some of her books and came across an edition of The Settlement Cook Book from the 1940s. First published in 1901, it reflected the food of “the Ghetto,” an impoverished Milwaukee neighbourhood of poor, newly arrived Russian, Polish and Romanian Jewish immigrants. Inside Linda found a page from The Province newspaper with a 1993 feature about the book and a short sidebar I had written:

The Settlement Cook Book is the kind of treasure that gets passed down through the generations. The 1941 edition was a favourite of my mother, Molly Mallin of Burnaby. And when she died in 1971, it was handed down to my sister Joan.

Today the book is a bit dog-eared, several pages are loose and the cover is held together with tape, but it still gets used in Joan’s Vancouver kitchen.

“I use it now for making pancakes and baking powder biscuits,” she says. “Its main value is that it was hers.”

Linda doesn’t recall when she acquired the book and there’s nothing inside indicating who had owned it before. Whoever that was had it for a long time because there are other clippings from 1947 and 2000. I’ll take it over to Joan’s on Sunday for a little surprise show and tell. 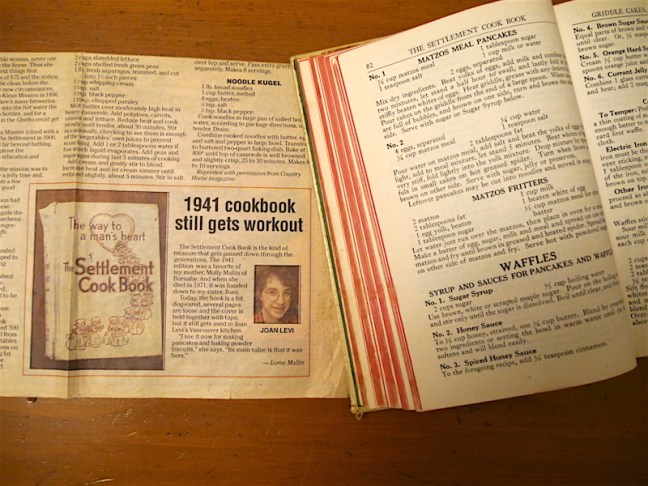