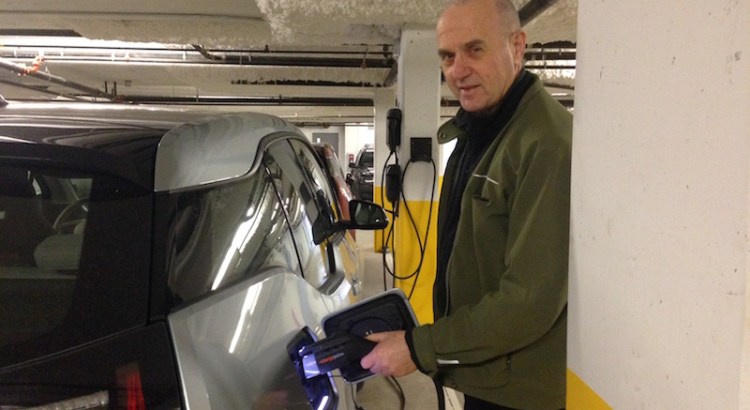 This weekend, I’ve traded cars with Ben, a neighbour at Vancouver Cohousing. He has an all-electric BMW i3 and was going on a trip with his wife Olive and daughter Margot beyond the vehicle’s range of 130 to 160 km (80 to 100 miles).

I’m not entirely new to driving a car with an electric motor. I had a Toyota Prius from 2005-2009 before I sold it and went off to live in Uganda. When I got back, I didn’t have quite enough money for another Prius and bought a Honda Fit. I’ve missed feeling that I’m part of the solution.

Driving the i3 is an adventure. When I step on the accelerator (can’t really say you’re stepping on the gas) it has immediate and surprising power. And when I take my foot right off, it pretty much stops right away, unless I’m on a downward slope. And whereas the Prius was silent idling and under 15 kmh, the i3 is totally quiet throughout your drive. There’s no instrument cluster and instead a screen ahead of the driver, plus a larger widescreen display in the centre of the dashboard for navigation and other features.

Between drives, the i3 is plugged into a charging station. At our cohousing parkade, we have two, brought to us by one of our members, J-M, whose company Big Green Island installs chargers in residential garages.

I’m not quite ready for an all-electric. At 69, my priority is accident-avoidance systems. I’m hoping that by the time I get into a new vehicle, there will be a plug-in hybrid with those systems and all-wheel drive that won’t cost a fortune. In the meantime, I really should dust off my bicycle and get pedalling.