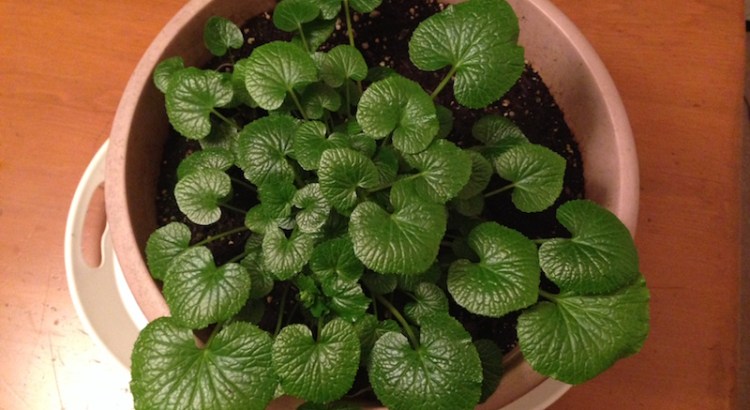 Growing eggplant in Uganda, detailed in yesterday’s blog post, is not my only vegetable gardening adventure. I’m growing wasabi in Vancouver. You think that green mound nestled next to the pickled ginger on your sushi plate is the real thing? Most wasabi served on this side of the Pacific is a mixture of horseradish, mustard and green food colouring.

I can hardly call my wasabi a crop. It’s just one pot – see the photo above – growing on my balcony. I was shopping two summers ago at Izumiya Japanese Marketplace in Richmond when I saw they were selling little wasabi plants. I picked one up and put it on my balcony.

Quite quickly the leaves were wilting in the summer sun. A quick google revealed they like to be in the shade, so I rigged up a lawn chair over the pot to shield the plant. With plenty of water, it’s been happy since. I’ve snipped off a few leaves to add to salad; they taste like mild wasabi.

In Japan, wasabi grows naturally in rocky river beds. In 2014, the BBC did a story  on wasabi farming in B.C., which had started a few years before on Vancouver Island. “Wasabi is deemed by most experts to be the most difficult plant in the world to grow commercially,” the story said. But the rewards can be very lucrative, with the roots fetching hundreds of dollars per kilogram.

The story said chef Nobu Ochi has been buying Island-grown wasabi and selling it to customers at his Zen Japanese restaurant in West Vancouver. “We send the grater out with the wasabi in it, and let them have the experience of grating fresh wasabi,” he said.

According to the BBC, the heat and flavour – significantly less bracing than imitation wasabi, but similarly sharp – last only for 10 to 15 minutes, so wasabi is grated as needed. “Once they taste it, like anything else that’s good, you don’t want to go back to the other stuff.”

I’ve lived in Japan for three years and visited several times. I must have had genuine wasabi but I don’t seem to have the discriminating palate to tell the difference. A blind taste test would be interesting.

I’ve learned that it takes about a year and a half for wasabi to mature and grow the roots. That’s now for my potted wasabi. I have no idea what’s going on under the soil. I’m a little afraid there may be nothing. Not quite ready for the Big Reveal. 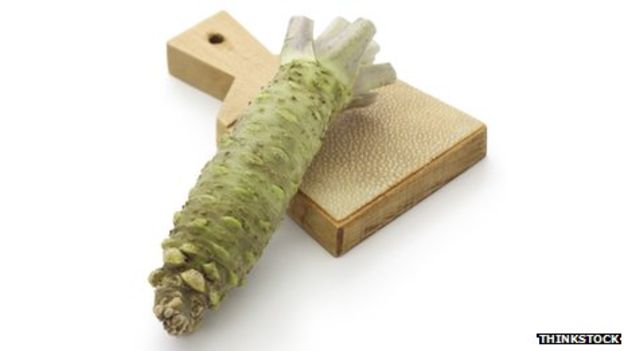 The wasabi root is stood on a grater made of a piece of sharkskin fastened to a wooden paddle. Using a circular, clockwise motion, you press the root down and a paste is formed.