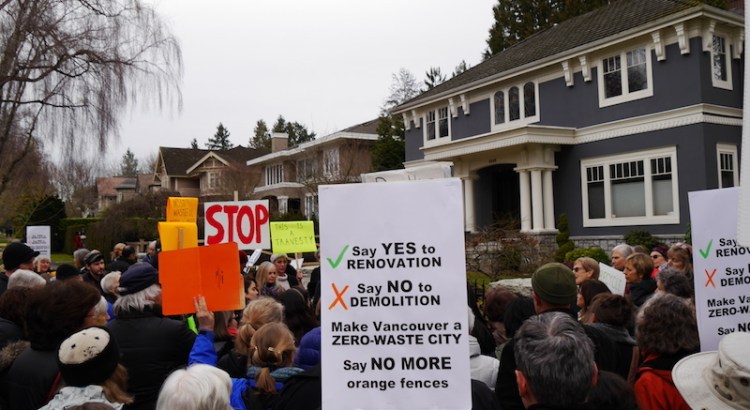 I joined a demonstration this afternoon at a 20-year-old Vancouver mansion assessed at $7.44 million that is slated for demolition. A corner property in the tony South Granville neighbourhood a few blocks from Shaughnessy, it underwent $350,000 in renovations just three years ago.

But the new owner who bought it in 2013 has applied to the City to tear it down and build a new house. Some may say that’s perfectly within a property owner’s rights. Who are we to complain? It’s not just this one house, this poster child for greed. There’s an epidemic of demolitions destroying homes for bigger ones, sending mountains of debris to landfill and helping make Vancouver even more unaffordable. That’s why people are protesting.

In its coverage of today’s demonstration, The Vancouver Sun reported that as of last year “almost 8,700 buildings were demolished in Vancouver since 2005 and that houses were still being torn down almost daily.”

I was alerted to the protest by my friend Carolyn through Facebook. I saw her there as well as other friends Barbara and David. Barbara said she fears that if the building where she rents is sold, she’ll be priced out of the city.

One of the complaints against demolitions is that gardens, mature trees and perfectly good building materials – often old-growth wood in older homes – are all ripped up and sent to the chipper.

I should disclose that as a member of Vancouver Cohousing, we demolished three single-family homes on the double-deep lots we bought on East 33rd Avenue. But we arranged for reusable building materials to be stripped from the homes before the bulldozers arrived. And we have built 31 homes where 48 adults and 18 children will live in a collaborative, more sustainable lifestyle.

Let me further disclose that in the mid-1980s, I helped subdivide a 66-foot lot in Point Grey, demolish the older Cape Cod-style house on the property and build my family home on my half of the land.

Today I feel aligned with this citizens’ movement to bring some sanity to what’s happening with housing in Vancouver. When Vancouver Green Counc. Adriane Carr spoke to the crowd today, she relayed an idea she’d heard: make the people applying for demolition pay a surcharge equal to value of the home they’re destroying.