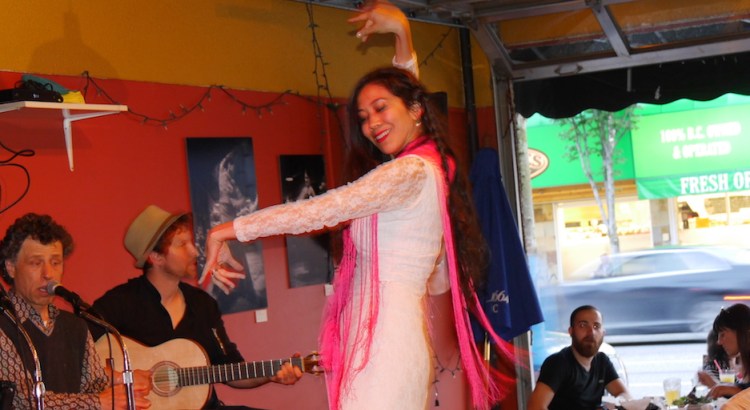 By day, my cohousing neighbour Cyrena Huang is a mild-mannered cello teacher wearing serious glasses. This weekend I discovered that by night, she ditches the glasses, wears a form-fitting dress and takes the stage at Vancouver’s Kino as a bold and beautiful flamenco singer and dancer.

What a transformation – kind of like from Clark Kent into Superman. But more about that below.

On Friday night, another cohousing neighbour, Paddy, and I settled into a table next to the stage and were treated to a passionate and masterful set of of singing, instrumental music and dance.

While flamenco comes from Spain, it has been embraced all over the world. The performers on stage were a prime example, with Cyrena, whose roots are in Taiwan, her teacher Kasandra “La China” Lea, whose roots are in Hong Kong, and musicians from Italy, Syria and Israel. 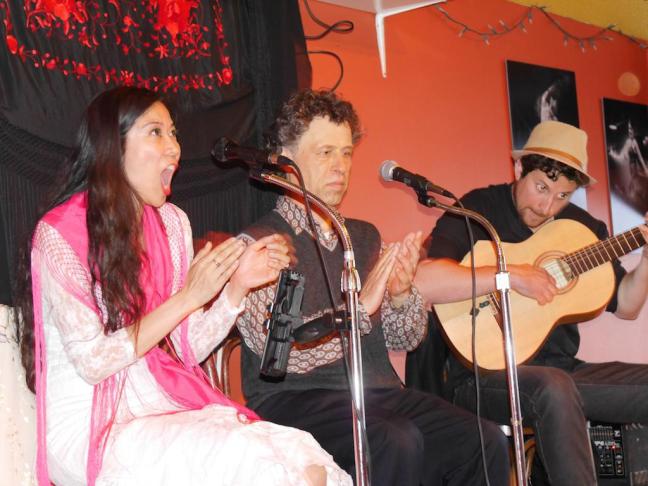 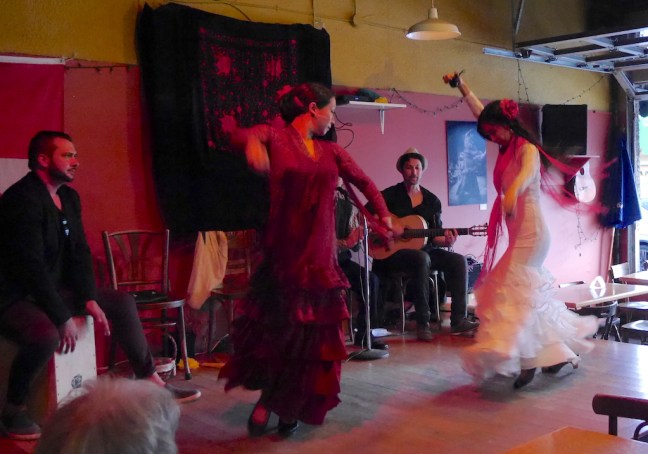 The Kino – next to the Park Theatre on Cambie – has been hosting flamenco performances for 23 years. There are three sets a night on Thursdays, Fridays and Saturdays. Cyrena first discovered it while walking by 14 years ago and was captivated by Kasandra’s dancing. (It turns out both had played in the National Youth Orchestra.)

Cyrena began studying with Kasandra at Al Mozaico Flamenco Dance Academy and in time has become a teacher there. Here is a 2007 blog post by Cyrena on the academy’s website where she describes her experience:

Ever since I can remember, I wanted to be a superhero. My brother collected the X-men, Batman, Teen Titans… I devoured them all.   My first ambition was to become Wonder Woman, because she was the only heroine who wasn’t blonde… until Spider Woman turned up, who was infinitely cooler and much more mysterious. I would lie awake at night dreaming of my super powers, and sketching skintight lycra catsuits for myself, each outfit more ridiculous than the last.  As a musician I was always hopelessly drawn to the songs of the persecuted. From a Yom Kippur prayer to a smoky torch song of a tragically wronged Billie or Chet, from the blues of the south to the unearthly suspensions of a viol consort. My mother continually lamented my love of all things steeped in melancholy yet I continued to wallow throughout the whole of my music degree, both inside the music studio and out. Time passed slowly.   Then I found flamenco.

Like many of you, I first heard live flamenco music at the Kino cafe on Cambie Street.  The searing, almost unbearable heartache of its cry, the warm, rich strum of the guitar, the bright staccato of feet pounding on the wood floor – from the very beginning it was the music that drew me like a moth to a flame.   I knew then that I had to dance. Had to! I had no choice – the music demanded no less.  Me, a musician with no more coordination outside of my 10 fingers!  Did I realize then that until now I’d lived my entire life ignorant of where my limbs were located in space? I started out as really the worst in my class. I was so hopeless people would give me a wide berth in order to avoid sustaining lasting injuries.

Flamenco came about as naturally to me as a deep-sea diving would to a cat.  I can honestly tell you the road I’ve taken has been and continues to be long, hard, excruciating and full of tears.  Yet despite all this, I realize that starting on this journey has been the most incredible, profound and life-affirming thing I’ve ever undertaken.

I can also tell you that all the tears and frustration are worth it for that one moment of real, honest duende where all the horrors of the world and crimes of humanity are somehow overcome in your one small act of insurrection. That the cares of the world fall away and you are lost in something so much greater than yourself.   Because the thing about jondo flamenco, the one thing that to me sets it apart from all the other tortured music, sombre dirges, plaintive wails, is that flamenco is not just a lament.  It’s not a mournful song of world weary resignation. Flamenco hasn’t the luxury of time to properly mourn because it’s still fighting the fight. It’s corny and cliché but flamenco really is full of fire.   Flamenco insists that despite every obstacle set in your path, despite the sure knowledge that any action available will certainly end in death or even worse, despite everything being stacked against you, that there still exists such ferocious pride and passion and.. life… inside you and everywhere – in every gesture, every sound, every little moment of your existence – that simply can’t be ignored. And knowing this, you can’t but realize that living in this world means fighting for your life, fighting to the bitter end, fighting because you’ve been fighting so long and so hard against all the injustices borne on you and everything you hold dear that it’s all you know how to do anymore.   I guess that’s what I love about flamenco. Flamenco gives me strength to fight for what I love. And it was inside me all along.   So here I am. I’m finally a superhero.