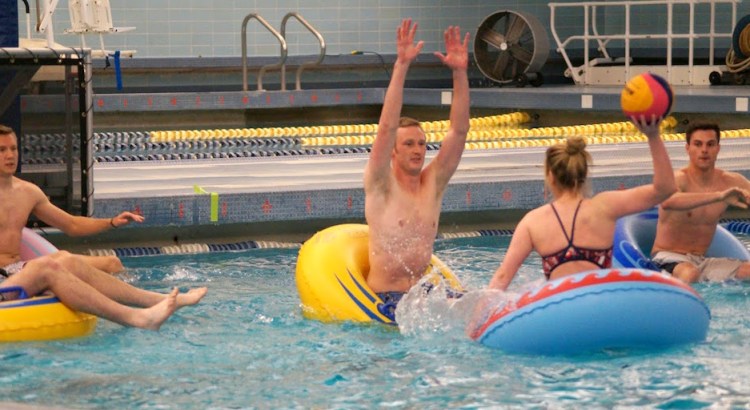 I’ve been immersed in the joys of inner-tube water polo. It’s great fun, full of laughter and intense competition. My family in Ottawa, who met playing this sport, has organized a weekly night with their friends at a nearby pool.

At first I was hesitant to play, mostly because I’ve got a belly I’m self-conscious about. But I can’t let that control my life, so I jumped in. The hardest part for a beginner is staying in the tube, because I was taught you can’t simply let your butt sag into the centre. To free your legs for kicking, you need to sit more on tube itself. Then you kick like you’re cycling, except backwards.

Here’s how Wikipedia describes the game, which was invented by an athletics staffer at the University of California at Davis in 1969:

Inner tube water polo is a variation of the sport water polo with the important difference that players, excluding the goalkeeper, are required to float in inflatable inner tubes. By floating in an inner tube, players experience less contact and expend less energy than traditional water polo players, not having to tread water. This allows casual players to enjoy water polo without undertaking the intense conditioning required for conventional water polo.

I started out playing in goal – also in a tube – so I could watch how the game works. I managed to block some shots but also let in a bunch. Then I ventured out as an attacker. So much for attacking. When you’re moving backwards, it’s hard to see where you’re going. And I struggled just to stay in the tube.

This may require less energy than regular water polo, but it was still a major workout for me. I spent as much time out of the water as in. Today I’ll be more in my element on a tennis court.