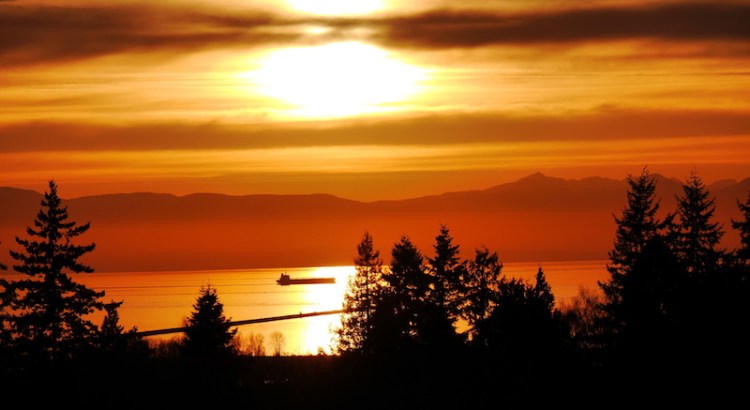 Love those sunsets from my balcony, even if this one was last week. I’m using it as a tenuous connection to reflections on the work I’m doing in retirement. Before my “Freedom 59” in 2006, I went to a financial planner at Vancity to see if I could afford to pull the plug on working 9-5. I only had 12 years in the pension plan. But he told me I was OK to retire, and that if I worked part-time during my 60s, my money would last until I’m 96.

That was incentive enough to seek out opportunities. One was working as publications manager for the Uganda country office of BRAC, the world’s largest anti-poverty organization. From our compound in Kampala, they sent me to South Sudan, Tanzania and other areas of Uganda to document for glossy annual reports the impact of their programs, mainly micro-finance, to raise mainly women out of poverty. It was inspiring to interview young mothers who had been selling say a small basket of tomatoes in the market, and then with a series of micro-loans were able within as little as 18 months to open their own market stall, build a house and send their kids to school.

After writing the annual reports, the job got a little tedious and I remembered why I had left the full-time work world. I returned to Vancouver and another opportunity fell into my lap. Because of a conversation between a close family member and a former university classmate, I was offered a contract to edit reports for an infrastructure strategy consultancy in Ottawa. That same former classmate recently moved to a provincial government agency in Toronto and now I edit for them too.

For a few years I wrote and proofread from time to time for the weekly Business in Vancouver. That work dried up but I’ve been updating a website and doing digital newsletters for a former editor of the paper. Which is what I was doing this morning.

As well, I do plenty of editorial work for no money. My favourite is editing the performer profiles for the program for the annual Vancouver Folk Music Festival. That earns me entry for the weekend and my lunches and dinners backstage. For two years, I created the program and promotional materials for the Limmud Vancouver learning festival as a volunteer. I’ve done similar promotional work for Vancouver Cohousing plus a monthly digital newsletter for the community. Ditto for promoting Chanting & Chocolate, and my charity projects for the Abayudaya Jews of Uganda.

So, my 60s are about over and this decade of occasional work has helped preserve my capital. I could ease off the work and play more. Well, after making a book out of this year of blogging. But there’s still a slice of my identity wrapped up in being an editorial professional. I don’t think I’ll be quitting it all anytime soon.