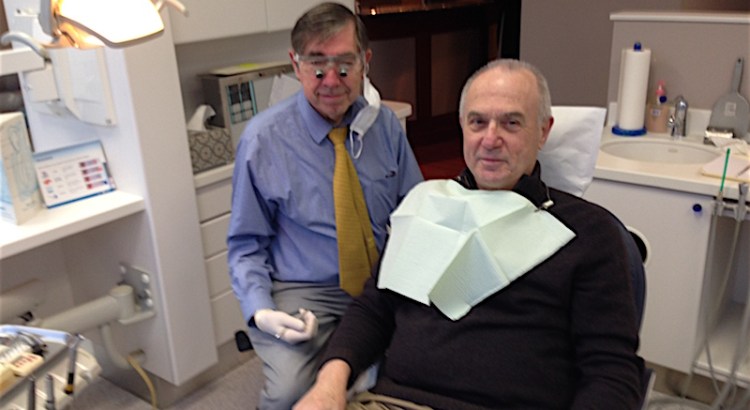 At my dentist’s I was remembering asking him more than four years ago to do a holistic review of my mouth. My idea was to take care of everything that needed work then or within a few years s0 I could pay for it out of my earnings from editing contracts and not wait until I was older and forced to take it out of savings.

Dr. Bill Rosebush examined every tooth. The verdict included four implants. Yikes, that’s about $5,000 a tooth. My gold-plated group dental insurance was chopped the moment I walked out of The Province at the end of 2006. I can honestly say that’s what I miss most about working there.

Bill sent me to an oral surgeon for the implants, which required extractions. Later the surgeon inserted posts and healing abutments. When I discussed with Bill about getting the crowns made, he said my situation was rather complex and arranged for me to get into the Prosthodontic Clinic at the University of B.C., where he teaches.

One advantage of getting into the clinic is that while the lab costs are about the same as private care, the work is done by graduate dentists in a three-year residency for their specialization. They charge general dentistry rates, instead of specialist rates. I saved about $2,000 per implant. Extractions cost me less than $100, compared with $400 at the oral surgeon.

And I did need more extractions because I ended up with eight implants in total and a bridge. The extractions at UBC were not only cheaper but much less painful. The oral surgeon used a short-acting anesthetic and yanked out the teeth while I was briefly out cold. I was in agony after the freezing wore off. At UBC, the residents teased the teeth out of their ligaments. I felt almost no pain after; steroids for a few days helped.

The most painful part of going to the university clinic is the time it has taken. It’s now almost three and a half years since I first went there, and the work is finally over except for a little tweaking. I graduated a couple prosthodontic and periodontic residents during that time. They all took excellent care of me and the clinic will follow up on me for several years.

Four years ago I began paying for extended health coverage, including a limited range of dental work, such as fillings and cleanings. I’m about to cancel the dental coverage because it is so limited and is really prepaid dental care rather than insurance.

Why don’t we have dental care covered with our universal health care in Canada? Many European countries do it. In 2014, a blue-ribbon panel released a report called “Improving Access to Oral Health Care for Vulnerable People Living in Canada.” As the Globe & Mail reported, “it said that publicly funded dental care programs need to be broader and more coherent and provide essential care to those most in need, including children in low-income families, seniors living in institutional care, people with disabilities, the homeless, refugees and immigrants, aboriginal peoples, and those on social assistance.”