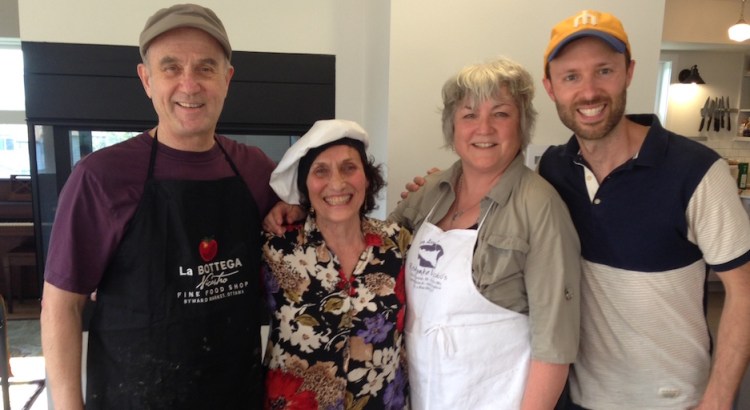 It’s taken me three weeks to get back on track with my blog. Day after day I’ve let it go. That old devil procrastination and a bit of feeling down. But I really do want to create a book out of this year of “Being 69” diary posts. No content, no book.

Today I was excited to take my turn cooking for the Vancouver Cohousing community. We have four common meals a week – three weekday dinners and a weekend brunch. Every month or so we’re on a team to shop, chop, cook and serve a meal.

This time I was teamed with Vesanto, Paddy and Ben. Vesanto, a well-known author of vegan cookbooks, suggested a menu of fish-free filets, yam fries and salad. Simple enough, but I wasn’t sure how many people would want to make faux fish the main part of their meal.

So I suggested an additional dish from the cookbook I’ve been exploring, Plenty, by Yotam Ottolenghi. It’s called Lentils With Broiled Eggplant, something I’ve never cooked before. I was motivated because I love eggplant, the book described the recipe as an excellent weekday main dish, and I wanted to offer a gourmet creation.

It’s quite a challenge to take a recipe serving four and make 10 times as much for our hungry crowd. Chopping carrots, celery and grape tomatoes for about 40 people seemed to take forever. Same with scooping out 14 hot and juicy eggplants after the fun of roasting them on the barbecue.

Rising to the challenge elevated my mood. I’ve been grieving the loss of my ocean-view Kerrisdale apartment after finally giving notice at the end of April. And it’s depressing to still be single 23 years after the divorce despite some meaningful relationships along the way.

I enjoyed working with my cohousing neighbours as we raced to get dinner on eight tables by 6. Once the meal is served, the cooking team often has something to say. I offered a reading from Bless This Food, a book (there’s an app too) about ancient and contemporary graces from around the world. This one was by Chief Dan George (1899-1981), a gifted actor, writer and chief of the Coast Salish nation, who I had the privilege of interviewing for The Vancouver Sun in the late 1960s.

The beauty of the trees,
the softness of the air,
the fragrance of the grass,
speaks to me.

The summit of the mountain,
the thunder of the sky,
the rhythm of the sea,
speaks to me.

The strength of the fire,
the taste of salmon,
the trail of the sun,
and the life that never goes away,
they speak to me.

And my heart soars