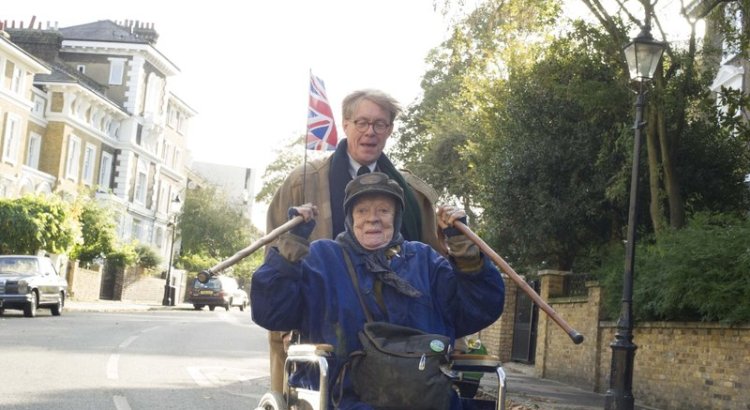 Tonight my buddy and I saw the excellent British film “The Lady in the Van.” It’s based on the memoir of writer Alan Bennett, played by Alex Jennings, and his awkward but compassionate relationship with a homeless woman, Miss Shepherd, played by Maggie Smith, who parks her derelict van in his driveway for 15 years.

I identified a lot with Bennett, who keeps a notebook of everyday life much like I keep this blog. He mounts a one-man show in London’s West End that exploits his relationship with his mother. “Will you write about me?” Miss Shepherd asks. “You use your mother . . . me next, I suppose.”

I plead guilty to also using people as a writer. We can be such sluts. As a reporter, I was my source or interview subject’s best friend until I got my story, and then it was goodbye and off in search of the next story. I felt a bit of déjà vu on Sunday, when I participated in the protest against rampant home demolitions to some extent because I wanted a good photo and content for that day’s blog post.

One of the subplots of the movie is Bennett’s love life. Younger men make brief appearances in his home, some scurrying away because of Miss Shepherd’s odorous presence in the front yard. In the end, though, he appears to find a loving partnership.

After the movie, my buddy and I discussed our dating misadventures over coffee. I had a Tinder date on Sunday with a woman whose taste for luxury and the lack of connection made the first date the last. He’s had some Plenty of Fish dates with an attractive woman whose lifestyle is challenging his capacity for compromise – she eats meat three meals a day, wears clothes festooned with feathers and lets her dog climb over everything in his neat home. He asked my advice and all I could say was to examine his priorities and decide what means the most to him.

Last month another friend sought my advice about using JDate, the Jewish dating site. Earlier this evening he called to relate that only one woman’s profile had interested him, but he had been loathe to pay to subscribe. Then he discovered she had cleverly written an acrostic in her profile that spelled out the address of her blog. He contacted her through the blog and they hit it off immediately. I’m very happy for him. Damn it. I’ve been on JDate on and off for years with no such luck.

Time is rapidly running out to meet someone special by Valentine’s Day, a day when I always dread being alone.