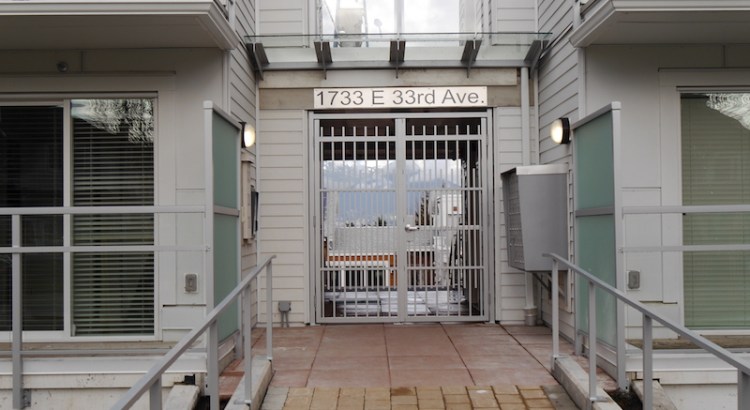 Today was huge for Vancouver Cohousing, almost four years after the process first began. We got approval from the City of Vancouver’s property use inspector, the occupancy permit is days away, I’m signing papers for my unit next Wednesday, we close on Friday and I’m moving the same day. Glory halleluyah, gotta get packing.
I took the photo above to show our address sign and the state of completion (Strangely, I get a kind of prison-like vibe from the image). I like our address: 1733 East 33rd Ave., and our postal code, which echoes our address: V5N 3E3.
It was an eventful day. I took my 2007 Honda Fit Sport to get cleaned at Premium Detailing, thereby eradicating the sour smell I could not locate. Drove me crazy. It was a deal on Groupon.
I went to my dentist to get my newly made night guard. While I was there, a regular patient came in and presented the receptionist, Silvana, with a big stuffed animal. The patient said when she turned 90, she got nine of the fuzzy creatures and wanted to spread them around. Silvana was overjoyed.
This afternoon, I donated blood at Canadian Blood Services. Without my car all day, I rode a lot of buses and walked a few miles. And after becoming Facebook friends with Ian Brown, my inspiration for “Being 69”, we exchanged some messages. I bought his book, “Sixty” at Chapters.
• • • • • • •

Hi Ian. Your “Sixty” has inspired my “Being 69”. Since my 69th birthday Dec. 30 I’ve been posting daily to my blog, lornemallin.com, with a link to Facebook, with the intention to complete a year and turn it into a book.

Somehow, I had the idea when I read that your project began with a post to Facebook that you continued your diary there. But I think it’s clear you kept it privately, except for some feature pieces in the Globe – right?

In your book, there isn’t an entry for every day. Did you write in your diary every day?

I’m a lifelong journalist, beginning with reporting at The Vancouver Sun at 18, later editing at The Toronto Star and ending the 9-5 at The Province where I retired early at 59. These days I do editing on contract.