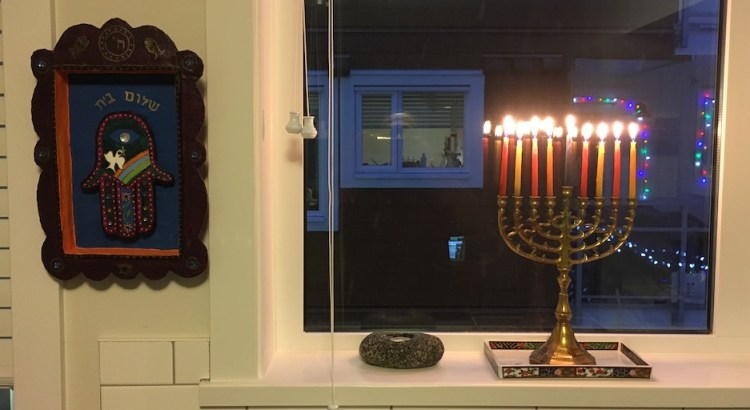 This is blazing candles night, the last night of Hanukkah, when we light up the whole menorah. It’s the cusp of 2017 with the New Year’s Eve party in the Common House beckoning, and my second day as a 70-year-old.

Seventy. It certainly sounds old. Elderly. As a young reporter, I referred to people in their 70s as elderly; probably people in their 60s too. One friend has welcomed me to my eighth decade. Yuck. Other friends say 70 is the new 50.

Maybe. When I turned 61 I wrote it down on a sheet of paper, turned it upside down and said, “The new 19!” Within a month I was diagnosed with cataracts. So not 19 again.

We’ll see how this new phase of life unfolds. You may see “Being 70” posts from time to time. I will be seeking advice about whether I can take the more than 110 “Being 69” posts of the past year, flesh them out with reflections and make a book that would be more than a vanity project.

After having designed and proofread books, and written a small chapter of another, I do want to have my name on the cover of a book. I was inspired by Globe & Mail writer Ian Brown who kept a diary of the year he was 60 and turned it into a popular memoir, Sixty. But he’s such a good writer – funny, introspective and absorbing.

I’m grateful that some people have enjoyed my blog posts. But the posts were seldom shared or stimulated discussions. I was thinking that writing as a 1946 baby I might be able to offer some insights to the millions of Baby Boomers whose 70th birthday is still distant.

Anyway, I had a fantastic party to mark my Big Seven-Oh. Upwards of 60 people joined me in the Common House at Vancouver Cohousing for an evening of great food, warm company, and dancing to the fabulous music of a mini version of the Jewish World Music group Sulam – Wendy Rubin, Laura Duhan Kaplan, Charles Kaplan, Martin Gotfrit and Joe Markovitch – with fellow cohouser Wally Watson, drummer for the legendary Vancouver band Doug and the Slugs, sitting in with my djembe.

I led a singalong of a couple of my favourite tunes, “I Shall Be Released” and “Forever Young,” both written by Bob Dylan. And I faced a creative challenge, publicly singing a most favourite but musically challenging song, “Whispering Pines,” written by Robbie Robertson and Richard Manuel of The Band, my all-time favourite group. It’s quite lonely and desolate, but beautiful too.

For several days I practised with another fellow cohouser, Ian Beaty, who played piano for me. And when I sang it at the party, it went well. Not exactly jumping out of an airplane at 70, but still a challenge met.

Fellow cohouser Cam Dore shot stills and video at the party and made a lovely 10-minute video: https://goo.gl/photos/vMD4DY8TSGNgzSiF7