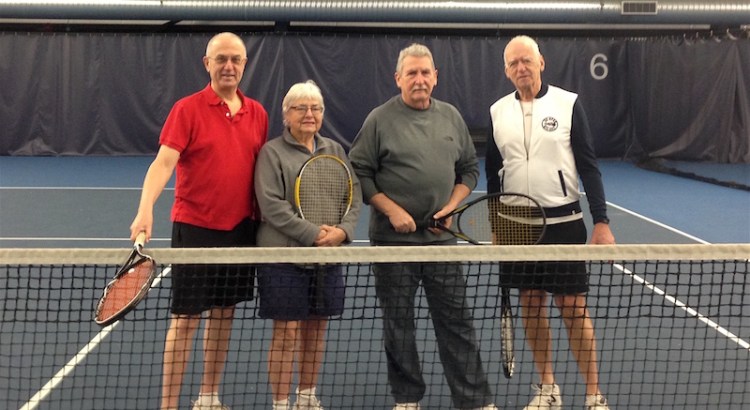 This morning playing doubles tennis at the University of B.C., I remembered some sage advice from a friend, Samadhi Dari: “Hit the ball consciously.” On the most basic level, to me that means keep my eye on the ball. Seems so simple, but failing to that has doomed me to mediocrity at any sport with a ball.

At the age of 10, I tried out for Little League Baseball in South Burnaby. I don’t know how well I kept my eye on the ball but I do know I’ve always tended to close my eyes when a ball seemed to be getting dangerously close. I didn’t make the team but was welcomed into the Blackhawks in the minor league.

In the minor league, we wore second-hand uniforms and were so strapped for equipment that when I played catcher, we only had one mask and pads for both catchers in a game. So poor we had only one jockstrap between us that we wore on the outside with the rest of the gear and shared between at-bats. There must have been some sniggers in the bleachers but I didn’t notice.

As a teenager, I chose playing sax in the school band over sports. But I did spend many happy hours playing ping pong with my dad in our cramped basement. Dad was a natural athlete who had played for the base basketball team when he served overseas in the RCAF during the Second World War. He played catch with me, set up a basketball hoop and even installed a punching bag in the garage.

That reminds me of a family story. Before my dad’s family immigrated here in 1913, they lived in England. We were the Malinsky family then. One of my great-uncles wanted to be a boxer but my great-grandfather didn’t want him to use the family name. So he became Bobby “Kid” Harris. I remember meeting Harris relatives in Winnipeg who looked a lot like Mallins.

As an adult, I jogged and participated in various running events. It wasn’t until I returned from living in Uganda in 2010 that I gravitated to racquet sports. I began playing racquetball at the Jewish Community Centre, and took tennis lessons at Queen Elizabeth Park. Now  I play mixed doubles tennis during the outdoor season at Dunbar Community Centre, and at UBC during the indoor season. Racquetball continues year-round.

Practising tennis and racquetball, I can focus on the ball but in a game I get anxious and lose concentration. Let’s see if I can break that habit.