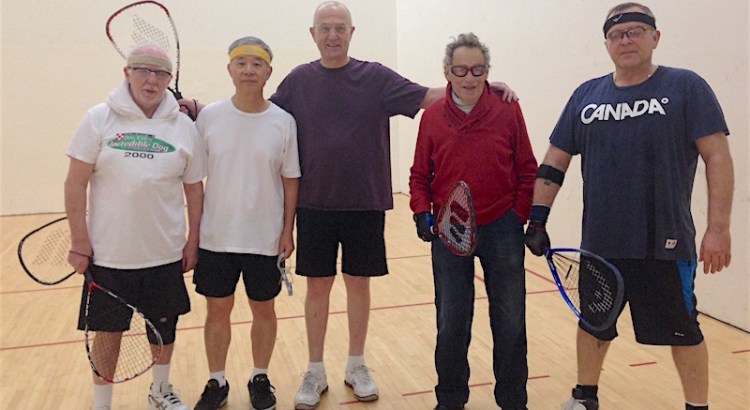 After the holidays, it’s back to my Tuesday and Thursday morning routine – racquetball and yoga class at the Jewish Community Centre. Not athletically talented, I’m grateful to these guys for playing with me. I’m especially grateful to Tevie, in the red shirt, who introduced me to the game when I returned from Uganda in 2010. Fifth day of daily practice when I got out of bed this morning, sent money to two students in Uganda, posted a rental ad on Craigslist for a three-bedroom at Vancouver Cohousing, updated a client’s website and produced her digital newsletter, Skyped to Ottawa, saw “Carol” with Roni this evening, and now writing this. Full day.

Greatest joy of my life

Four years after the move to Vancouver, our daughter was born. I am honouring her request not to have her life details in this blog. But let me say that being her father has been the greatest joy of my life.

Early on as a parent I started a fathers’ group for dads devoted to their kids. We shared our stories and found support for our devotion. Some of the fathers who came were from Or Shalom, the Jewish Renewal community in Vancouver. Until I encountered Or Shalom, I thought “Jewish spirituality” was an oxymoron after the dry, lifeless experience of my youth in synagogues. Or Shalom was creative, musical and egalitarian, but still I danced around the edges for some years.

We bought our first house on West 5th Ave. in Kitsilano  for $110,000 in 1979, then sold it five years later to build a home further west on 5th in Point Grey. With a sweeping view of the mountains and ocean, it had many special touches, such as a Japanese bath and garden.

At the end of 1989, I took a year’s leave of absence from The Province and we went to live in Tokyo – see photo above – where I worked for Knight Ridder Financial News and my wife launched a business. In Japan, I began playing taiko (Japanese drums). I extended the leave twice but when we returned to Vancouver my wife essentially stayed in Japan to run her business. We divorced and I became a single dad.

Back in Vancouver, Or Shalom reached out and supported us so warmly I finally became a member. I also joined a taiko class taught by John Endo Greenaway that grew into a performance group called Tokidoki Taiko. I played until 2001 when I suffered “taiko elbow”. Around the same time, I retired from 25 years of running after complications from a stress fracture.

In 2004, I took a two-year training in sacred chant leadership with Rabbi Shefa Gold from New Mexico. That year I began offering evenings of Hebrew chanting on the last Sunday of the month, which continues today as Chanting & Chocolate where we chant and then serve tea and triple-chocolate brownies that I bake. A powerful vehicle for healing energy, chanting is my most direct path to connection to the Divine.

I wanted to retire from the 9-to-5 before I turned 60. My last day as a 59-year-old was my last day as an editor in the entertainment section at The Province newspaper. I rented the ANZA Club for my Freedom 59 party the next night. Eighty friends and family came. We rolled out rugs for an hour of sacred chanting, then rolled them up again to boogie into the night with a rockabilly band.

The next two years took me all over the world on travel writing assignments to such places as Peru, China, Japan, the Bahamas, Kenya, Mexico and Ukraine.

Most of my life I had the intention to at one point spend a year or so in the developing world giving back for my privileged life in Canada. The recession of 2008 lopped 20 percent off my capital and it was no longer sustainable to take income from my investmentys. In looking for volunteer opportunities where I could live off my pension, I googled “Jewish” and “volunteer” and up popped the Abayudaya community of African Jews in eastern Uganda. I knew them through a CD of their music, which features Jewish prayer with African melodies and rhythms.

I contacted them through a U.S. NGO called Kulanu and headed to Uganda on my own. I lived in the village of Nabugoye Hill, taught in the Abayudaya primary and high schools and found many ways to be of service. After Nabugoye, I worked in the capital, Kampala, as publications manager for the Uganda country office of BRAC, world’s largest anti-poverty organization, and hosted biweekly Shabbatons for Abayudaya university students. Since my return home, donations from our chant nights and my monthly Shabbat dinner in Vancouver help send five Abayudaya orphans to school, and I have other projects that support women and girls.

These days I keep my editorial skills sharp polishing reports for an Ottawa consultancy and an Ontario provincial agency. I also update a client’s website and produce her digital newsletters.

Next month I move into Vancouver Cohousing, a 31-unit project in collaborative living I’ve been involved in since 2012 and is almost finished construction. In fact, tomorrow I get to see my own finished unit for the first time.