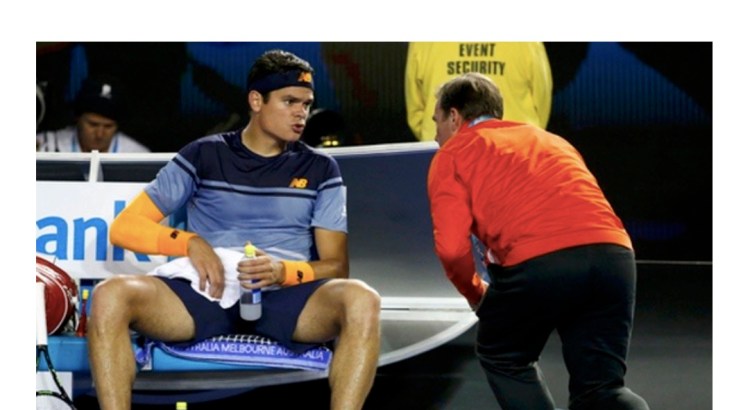 My Thursday began unusually early, just after midnight. Here’s how the day unfolded:

12:30 a.m. – Began watching Canada’s No. 1 tennis pro Milos Raonic play against British star Andy Murray in a semi-final at the Australian Open in Melbourne. First player to take three sets wins. Milos was up two sets to one when he asked for a medical timeout. In the AP photo above he’s showing the tournament trainer with his right hand where his adductor is injured. Murray went on to win the fourth and fifth sets and book his spot in the final. “It’s unfortunate – probably the most heartbroken I’ve felt on court,” Milos said after.

9:01 – Woke up groggy and shocked. I had set the alarm for 7:45 p.m. on my iPhone. Called one of the players, jumped in the shower, grabbed two bananas and headed out the door.

9:30 – Arrived on court, apologizing profusely. Pam said I should use a real alarm clock. Had fun playing until 11.

12:30 p.m. – Reheated a bowl of the organic split-pea soup I made the other day in the crock pot.

2:00 – Did my brief daily practice of chanting, meditation and yoga.

2:22 – Sent a text to Marcie-Ann in Toronto that I’d done my practice. She’s a fellow graduate of the Kol Zimra chant leadership training, which fosters “spirit buddy” relationships for mutual support. So Marcie-Ann and I are spirit buddies for our daily practices.

5:02 – Called my cousin Esther in Winnipeg and chatted for going on an hour. My mention of the late Rabbi Zalman Schachter-Shalomi in a previous blog post prompted her to tell me about a sermon he delivered in Yiddish in Winnipeg years ago. I said I’d send her a photo of me and Reb Zalman (below).

6:39 – Replayed CBC’s newscast “The World at 6” on my iPhone while I prepared a quick solo dinner. Campbell’s Chicken Noodle Soup is one of my guilty pleasures. I added organic broccolette, and chicken and cilantro mini wontons, mushroom stir-fry sauce and Japanese shoyu.

6:57 – Sent an email to a young woman in England who inquired about my sublet that she saw on the UBC Rentsline.

7:30 – Responded to a woman on Match.com with whom I’d exchanged some messages. Tried to diplomatically ask when her profile photos were taken, because they seem to be from different eras. I caption my photos with the month and year. Truth in advertising.

8:30 – Worked on a client’s website that I update, failing to solve how to restore the testimonial slider that had disappeared from the home page. Yes, I know it’s Shabbat. I can be pretty loosey-goosey about when that kicks in for me. Often, when I’m alone on Friday night, my Shabbat really starts when I arrive at Or Shalom for Saturday morning services. 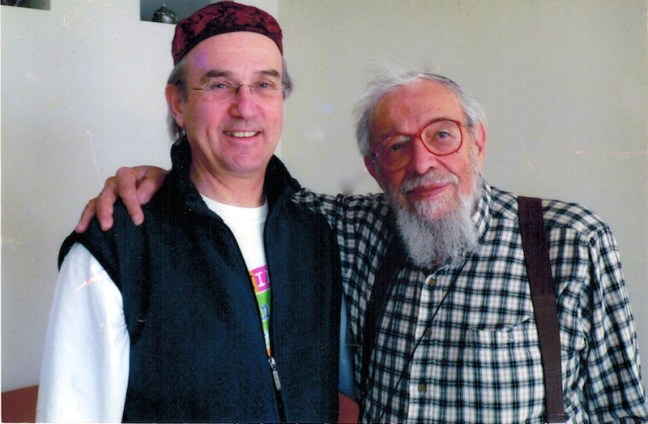 With Rabbi Zalman Schachter-Shalomi at his Boulder, Colorado, home in 2004.