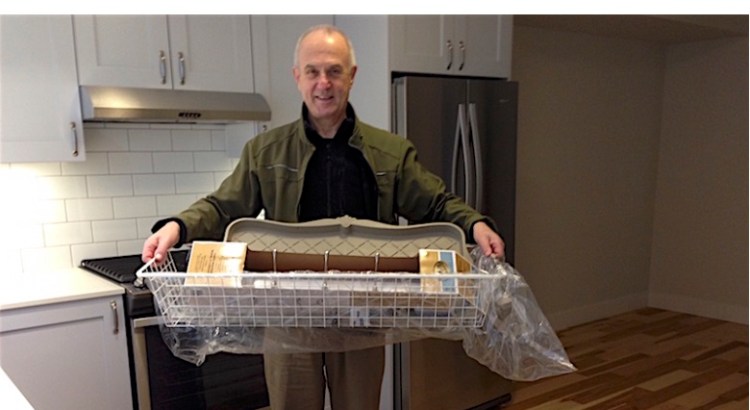 I’ve been waiting a long time to use that hashtag #OccupyVancouverCohousing. At least in a headline, because I don’t really understand Twitter. Today we finally got our occupancy permit for Vancouver Cohousing, which clears the way for completing our home purchases and possession. As our usually understated development manager, Ed, announced in an email: “At last !!!!!!!!”

If I don’t utterly fail to pack up by Friday, I’ll be sleeping there at 1733 East 33rd Ave. on Friday night. In the meantime, yesterday I brought a few things there from my storage unit – see photo above – so I can make space for more stuff from my Kerrisdale place to go into storage. Do you remember George Carlin’s hilarious routine about “Stuff”, that a house is just a pile of stuff with a cover over it.

Let me stop here. I know my aim has been to post every day that I’m 69, but I’ve only packed one box so far and Friday is fast approaching. I spent a chunk of this evening promoting next Sunday’s Chanting & Chocolate. I’ve posted on 54 of the last 55 days. Now I’m going to take a break from blogging until the weekend and focus on getting myself moved. See you soon.