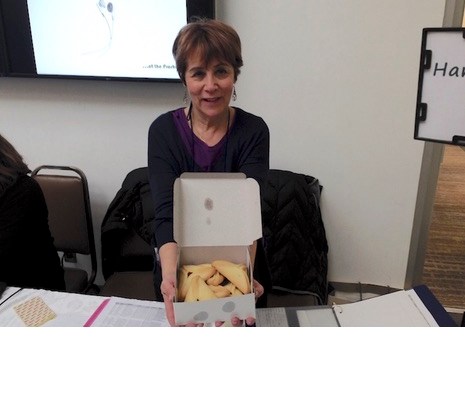 Most Jewish holidays have a similar basis: They tried to wipe us out, we survived, let’s eat! That’s certainly the case on Purim, a one-day merrymaking holiday beginning Wednesday evening. The most iconic food for Purim is hamantashen – cookies in a triangular shape like the hat of the villain of the story, Haman, filled with prunes or poppyseed butter or chocolate and other confections.

I’ve already got a head start on the eating part. This morning at the Jewish Community Centre I picked up two dozen baked as a fundraiser by Na’amat Canada, which has been enhancing the lives of women and children in Israel and Canada since 1925. In the photo, Ruth is displaying a box of hamantashen.

I sent a dozen to a close family member back East so they’ll arrive by Wednesday. Then I came home, made a fresh cup of coffee and began munching. There must be something soporific about hamantashen, because I dozed off a few times for a good part of the day.

Purim is different from other holidays in a couple ways. One is that the story as told in the Scroll of Esther never mentions God. It commemorates the deliverance of the Jewish people in the ancient Persian Empire from destruction in the wake of a plot by Haman. The good guy in the story is Mordechai. The other thing that makes Purim different is that in celebration people drink until they almost can’t tell the difference between the good guy and the bad guy.

I got a bit of a head start on that too this evening when Heather invited her cohousing neighbours to come over for wine to help her celebrate her new job. Two cups were enough. I got drunk a few times in my 20s, ending up with my head over the toilet, and never want to go through that again.