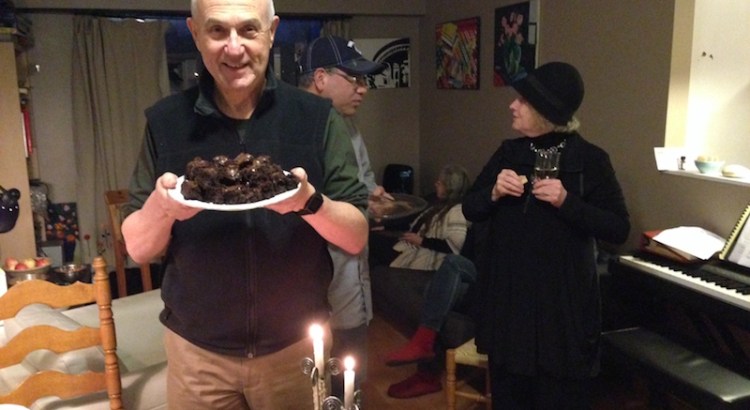 Born in 1946, made it to 2016. So far, so good, I’ve been blessed with excellent health. The maternal line of my family has not been so fortunate. My grandmother died at 52, my mother at 50 – both from cancer – my sister has MS and her daughter has had health scares. I visited my sister today and her spirit is still strong. I pray for a miracle that she can walk away from her wheelchair.

I brought in the new year at a party near my home with old and new friends. I enjoyed meeting Saeed, who came to Canada as a refugee from Iran in the ’80s. His daughter is half-Korean, while mine is half-Japanese. The party greeted 2016 at midnight with hugs and kisses, and formed a circle to chant in Sanskrit while I banged on a drum.

Have you made New Year’s resolutions? Sadly I’ve never sustained a daily spiritual practice. Today I began with five minutes of chanting, five of meditation and five of yoga with the intention of building that to 20 minutes of each over the year. When I took the two-year chant leadership training with Rabbi Shefa Gold in 2004-05, she gave us the assignment to spend 20 minutes a day in the silent presence of the Divine. This morning I chanted along with Shefa on her “Flavors of Gratefulness” app, available at the App Store. It’s 36 different daily melodies to the chant of Modeh Ani Lefanecha, Ruach Chai V’kayam (I gratefully acknowledge Your Face; Spirit lives and endures), our prayer for greeting each day. I was delighted to find that today’s melody was one of the first chants I learned after experiencing Shefa at a Jewish Renewal retreat in 1995.

In the afternoon, I baked triple-chocolate brownies and brought them to Al’s place, where he graciously hosted a drop-in New Year’s Day potluck that flowed into a Shabbat dinner. Shabbat Shalom. Photographer Alan Katowitz snapped the photo with my iPhone. And yay, the Canucks beat the Ducks in a shootout tonight.